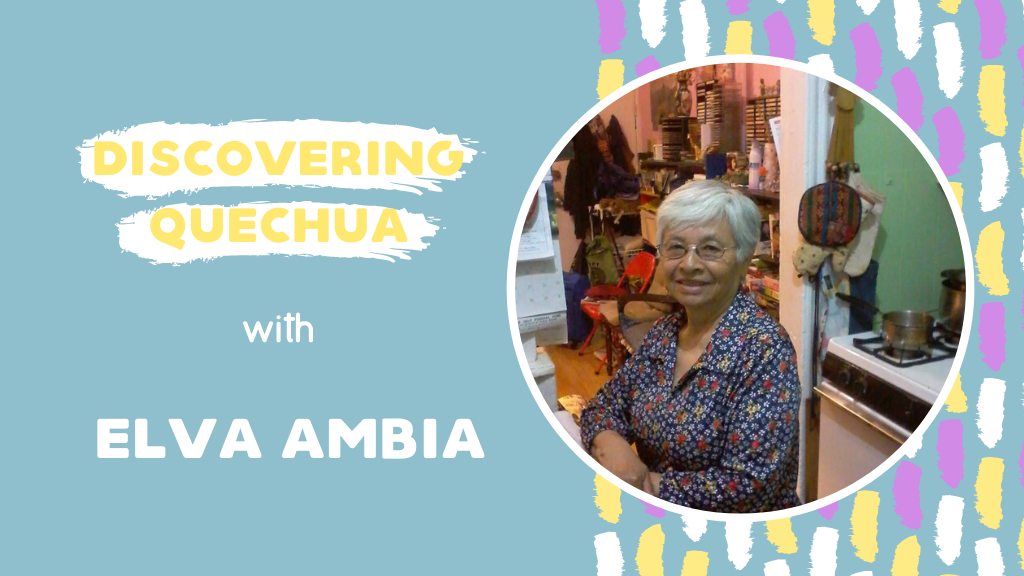 Last summer I had the privilege of meeting with Elva Ambia, a native of Peru who immigrated to the US as a teenager to work and help support her family. Although she primarily used Spanish and English in her daily life, she missed being able to connect with others in her native language Quechua. That’s how her organization Quechua Collective was born. Through classes and community events, Elva has been passing on her language and culture to the next generations.

I’ve wanted to start a language podcast for the longest time, even though I have zero experience with podcasting. There are a trillion out there; most of them (including some of my personal faves) are concerned with learning a specific language. I knew from jump that wasn’t the direction I wanted to go in. At the very least because I’m interested in too many languages to devote that much energy to just one, haha.

That’s when I started brainstorming ways to hit on not just language, but culture as well. Eventually, I’d even like to throw a bit of travel in there too. And it just punched me in the face one day.

“What about the ‘other’ languages? The ones they don’t ever teach in school?”

I’ve always been interested in the languages that get far fewer chances to shine, so why not focus on those? Bam.

In all honesty, I don’t know what possessed me to Google “Quechua New York” one day but that’s exactly what I did and the Quechua Collective was the first thing that popped up. After reading about Elva I knew I had to talk with her. There are a lot of wonderful larger organizations out there doing the work to keep indigenous languages thriving, but I couldn’t pass up the chance to hear directly from someone who was living it.

I had already put in my notice at work and I knew I’d need some time away afterward anyway. So I actually booked my flight to New York and decided to shoot my shot at interviewing Elva. It was incredibly terrifying because uh, I’m nobody. For real. Just a language nerd whose version of ‘living my best life’ consists of puppies and copious amounts of kimchi. Elva had been on radio stations. She had a documentary. Thankfully the spirit of YOLO jumped into my body that day and I hit send on the email. Much to my surprise, I got a yes! I literally did a happy dance.

About ten minutes later my brain caught up and I started freaking out. How was I supposed to do this? I’ve never interviewed anyone before? What kinds of questions was I supposed to ask? Are there super-secret important protocols? Why am I like this? Praise the universe for Google because I spent like an entire day just researching how not to be a disaster come June.

While I was wracking my brain trying to think of a location I could maybe rent out for the day, Elva surprised me by offering to do the interview in her home. Which, definitely wasn’t expecting that. Fun fact: As an introvert, I cannot even begin to imagine having someone over just because(plus nobody wants to walk up three flights of stairs). Home is where I get to avoid people. I felt grateful that she was trusting me in her space in that way.

I’ve been to New York a dozen or so times and I love the city’s energy. Chicago is a big city but with a completely different vibe. I had actually given myself a couple of days before we met up and was relaxed up until that point (learn yourself people). When the time came I traveled all the way down from the Bronx to her apartment, a hot mess of nervousness because I’d never done anything like this before. But the second Elva invited me in it all dissipated. It literally felt like I was stopping by my grandma’s house. We settled at her kitchen table so she could have dinner while her daughter made tea.

Conversation with Elva was so free flowing and easy for me that I almost forgot to turn on the damn mic and start recording. She actually reminded me before we got to really talking which, wow. Way to go me.

After the interview wrapped up she asked if I wanted to take a look at the documentary made about her, Living Quechua (Runasimiwan Kawsay). I’d wanted to watch it before I even got to New York but couldn’t so I jumped at the chance.

Elva showed me pictures of her family and told me about her journey from Peru to America. I also got a chance to read her book, Qoricha. The synopsis:

Qoricha, Charanguerucha, Huk Kumpachata Tarin (Qoricha, the Charango Player, Finds a Friend) is the tale of an unlikely friendship, crossing cultural and linguistic boundaries. When Charlie, an English-speaking boy from New York, becomes lost in the streets of small town Peru, he befriends a local Quechua-speaking boy, Qoricha, who takes him under his wing and helps him to find his parents. Along the way, Charlie and Qoricha share their languages, teaching each other words in English and Quechua, and realizing a friendship that would last a lifetime.

This book is a trilingual book, written in English, Spanish and Quechua.

I’m super mad at myself for not getting it at the time (that’s what happens when you don’t carry cash kids) but I’m hoping to pick one up the next time whenever I get my butt back to New York.

Still, I’m glad I got to start my podcasting journey with Elva.

If you’d like to learn more about the organization or just Quechua culture in general, definitely check them out: