3 Reasons Why All Language Learners Should Try A Study Group

Many people’s first foray into study groups happens in high school, but I wasn’t invited to my first study group until I was in my freshman year of college. It was for my biology class, and it was mostly people who were in my dorm. As I’m sure you can imagine, it didn’t go very well. I learned absolutely nothing. And eventually, I ended up just working by myself.

Fast forward five or so years and a former classmate in my Korean classes asked me if I’d be interested in forming a study group with her. Now, I had asked her about study groups before because I knew that she was already in one. I was curious as to what made her decide to join a study group, and where she even found one. So when she asked me if I wanted to form one with her it was like, “Oh okay. Sure! This will be fun.” I knew that even if I didn’t really learn much at least we’d get to hang out. Much to my surprise, not only am I having fun hanging out with my classmate, I’m also actually learning!

Today I wanted to share a few quick reasons why languages learners should give study groups a chance! 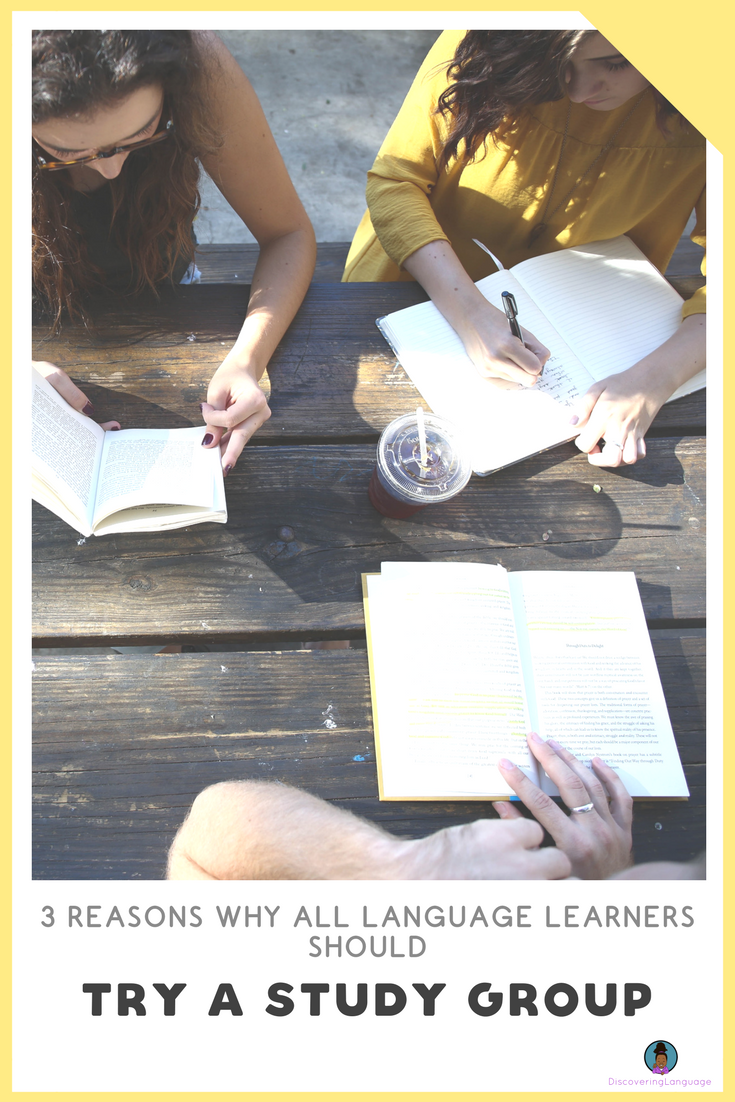 you actively consider your level of proficiency

When I first consider joining a study group for Korean language Learners I ended up on the Meetup site. In one of the Korean language meetups, there was one that was an actual study group. Cool! There were a dozen or so nice looking people in it. I was about half a second away from hitting RSVP…

When I glanced down and actually read the expectations of the group leader and the types of activities that they were doing during the meetings, I realized right away that their proficiency level was way above mine. It wouldn’t have done me any good to join, only to find that I couldn’t understand anything or keep up at all. You don’t want to be that person who’s holding everyone else back. And I mean, I learn languages fast comment but I’m not a prodigy.

On the flip side, I knew that I didn’t want to join a study group with absolute beginners. I have a grasp of very basic Korean grammar, as well as a small vocabulary. I can also read and write the Korean script, 한글. Upper Beginner is totally a thing, and it’s really hard to find people who hover at that level at the same time as you.

With my classmate it’s different. She’s around the same level as me, and that I don’t have to worry about moving too fast or falling too far behind. We both put in our opinions on what topics to study, we create quizzes for each other, and we practice our speaking with one another. Knowing your level and surrounding yourself with people who are only slightly below or above your level is the best way to go in my opinion. It ensures that you’re not holding yourself back or trying to challenge yourself too much just to fit the dynamic of the group.

YOU DISCOVER Everyone REALLY DOES make mistakes

It’s not a secret how much I hate messing up. Not that I do it too often or anything, but it still sucks. With languages, it always seems worse. At least if you mess up in your native language, you might be able to explain your way around it. But with a foreign language, you probably don’t even have the necessary vocabulary. Of course wtih being part of the language Community, sometimes (read: nearly all of the time), it’s hard not to compare yourself to others who speak your target language at a higher level than you. You start to think everybody else learning your L2 is amazing and it and you’re the one failure who just can’t grasp the subjunctive.

Being a part of the right study group alleviates some of these feelings of inadequacy, and shows you that a lot of what you’re thinking is total bull.

The reality is, every single person who speaks a language makes mistakes in that language. It doesn’t matter if they’ve been studying for two years, twenty years, or are native speakers who’ve been using it their entire lives. Being in a study group with other people who have the same goals in mind, you see that your counterparts have language difficulties of their own. It’s why you’re all there! You are not the only person who thinks they’re really really bad at their target language. Bouncing knowledge off of each other facilitates better learning. Correcting other people and having to explain those corrections forces you to think critically about how well you actually know the topic you’re studying. Make your mistakes work for you!

You get better at managing your time

Time is the one thing we never seem to have enough of. Time and puppies.

When deciding to start or join a study group, you’re making a commitment to yourself and your study mates. What a lot of people forget though, is it isn’t just about the extra study time you’re doing on your own. Things like transit time and the actual time you spend meeting up can seriously eat into your Game of Thrones marathon plans. But if you’re serious about improving (and helping others improve), you’re going to find a way to make it work. Usually, that happens through prioritizing.

Things like work and school are obviously top priorities. Eating and exercising are pretty important too. But if you want to get in some extra study time, you’ might have to reconsider your regular Friday night routine. It doesn’t mean you have to give up your fun time entirely. You just have to learn to fit in studying whenever you can. If you don’t manage your time (and never study), then a study group seems like a waste no?

Make the time. Make the most of it.

Have you ever been part of a study group? What did you love (or not love so much) about it?